When beer was made by kings, or, beer barons of the upper midwest

Strange Brew, the 1983 Rick Moranis movie,  readily comes to mind when I see the site of the former Minneapolis Brewing Company (aka the Grain Belt beer factory / Grain Belt Brewhouse). The ornate and looming structure is reminiscent of that film’s fictional Elsinore beer company. The building, built in 1892, is located in Northeast Minneapolis, across the Mississippi River from Downtown, is listed on the U.S. National Register of Historic Places (NRHP Reference # 90000988). I had had no idea this building even existed, so when I saw it for the first time I was overwhelmed. The brewery stopped operating in 1976, and the buildings remained vacant for many years until being renovated in the early to mid-2000’s, and now is used for offices (RSP Architects), art studios (Grain Belt Studios), and events (Autumn Brew Review). (Map)

Following a similar trajectory is the former Schmidt’s Brewery, located in St. Paul. This building dates back to 1855, and is just as impressive as the Grain Belt Brewhouse. Like its Minneapolis counterpart, the Schmidt’s Brewery no longer operates as a brewery,  but it was still producing beer as recently as 2002. In 2013 one of the campus’ buildings was converted into the Schmidt’s Artist Lofts. Residents have already moved into the renovated bottling house, with completion of the main brewery slated for later in 2014. (Map) 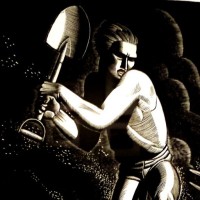